Sorry! You missed Bring Me the Horizon at Fillmore Miami Beach 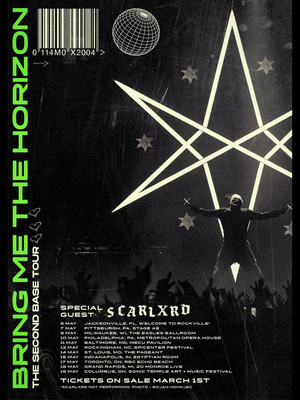 Bring Me the Horizon

British metal gets its arena swagger back

Why See Bring Me the Horizon?

The second base tour

British hell raisers Bring Me The Horizon are no strangers to controversy. The brash, in-your-face metalcore band make no apologies for their outlandish antics and onstage behaviour and while their blend of emo and deathcore may be divisive, it introduced a whole new generation to metal. 2015 saw the band take a mature direction with the release of That's The Spirit, a triumph of an album that spawned arena-filling tours and critical acclaim. Fast forward to the present and the band are on the road again with their The Second Base Tour!

The quintet's shows are synonymous with high-octane, mosh-pit inducing performances that never drop in intensity. Unafraid to mix up genres and styles, their latest work careens from upbeat electronic anthems to bone-shaking and rage-filled manifestos in a heartbeat, and this translates to an exciting and unpredictable live show replete with enough pyrotechnics to put the Olympic Opening Ceremony to shame.

There was so much energy coming from the band and the crowd; at one point... more

BMTH did NOT disappoint!! I have wanted to see them for a few years and... more

Sound good to you? Share this page on social media and let your friends know about Bring Me the Horizon at Fillmore Miami Beach.