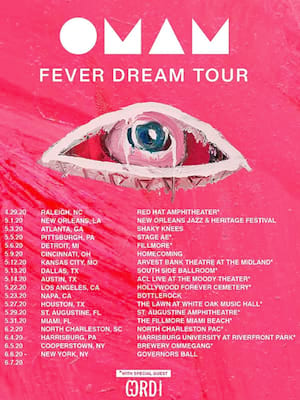 Of Monsters and Men

The reasons for their success are simple: terrific songs that combine the folky with the epic, and instantly infectious choruses big on "la la la"s and "hey hey"s.

Why See Of Monsters and Men?

A bouncy six-piece outfit hailing from Iceland, with songs infused with more color than the aurora borealis, they deal in infectiously indie-folk filled choruses, that give way to titanically triumphant anthems, whilst taking you along for the ride. After winning a battle of the bands in their native Reykjavik, their debut record 'My Head is an Animal' became a worldwide hit, with lead single 'Little Talks' cementing their place in the mainstream.

Now they head out on a new US tour to support the release of their third album, 'Fever Dream', following its 2019 release, hailed by hit lead single 'Alligator'.

With talents that can merge the feel of a campfire sing-along into a heavily atmospheric epic, reminiscent, yet completely unique of, their fellow Icelanders Sigur Ros, Of Monsters and Men are the real deal!

Note: I wasn't in Philadelphia; I did the rating only because it was req'd . OMAN... more

Norm And Cyndi: “The Met-Of Mosters and Men”

Went to Philly with my wife (we are from Atlanta) to see Of Monsters and... more

Sound good to you? Share this page on social media and let your friends know about Of Monsters and Men at Fillmore Miami Beach.