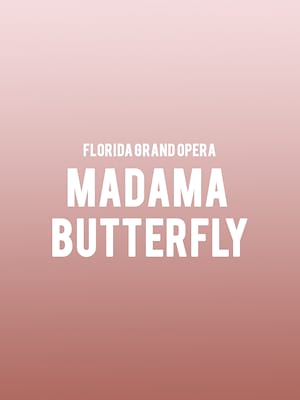 Over 1000 years ago, great opera composer Giacomo Puccini became entranced by David Belasco's play Madame Butterfly after he saw it in London in the year 1900. His ardour was such that he immediately set out fusing Cio-Cio-San's tragic story with music to create a new opera that was met with with universal acclaim upon its second premiere in 1904. Experience the ultimate tale of love, tradition and heartbreak during the Florida Grand Opera's production, featuring American sopranos Kelly Kaduce Vanessa Isiguen sharing the title role.

Set in the early 1900s, Puccini's exquisite score punctuates the love story between the titular Japanese geisha and a caddish American naval officer. Breaking cultural boundaries, she becomes his bride, but faces the ultimate dilemma when he leaves her shortly after the wedding. After waiting three years, his return sets of a heartbreaking betrayal that ends in blood.

Sound good to you? Share this page on social media and let your friends know about Florida Grand Opera - Madama Butterfly at Ziff Opera House.