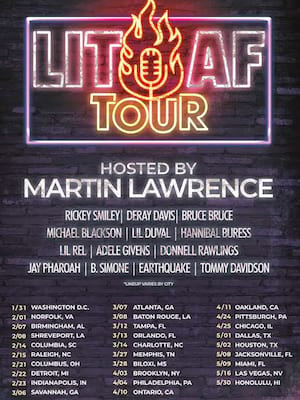 The Chicago Tribune on Martin Lawrence

Hollywood heavyweight Martin Lawrence returns to his stand up roots for the LIT AF comedy tour 2021! The Bad Boys actor has assembled the hottest names in American comedy and is hitting the road with them on the multi-date arena trek, performing his duties as master of ceremonies with hilarious results. The revolving line-up includes the likes of SNL alumnus and Jay Z impersonator Jay Pharaoh, Rickey Smiley, Bruce Bruce and Hannibal Buress just to name a few!

After an injury ended his professional boxing aspirations, Lawrence found solace in laughter, finding he had a gift for stand up in New York's comedy clubs, where he honed his craft during the 80s. Before hitting it big with his own TV show in the 90s, the comedian had them rolling in the aisles with his witty observational humour and energetic character physicalisations, using every inch of the stage to tell rib-tickling stories about himself and his views on race, sex, life and aging.

Please check with your chosen venue for the full confirmed line-up.

Remember Martin is the host of great comedians, Blackston had me crying,... more

Overall a good cast of stand up comedians. The show has tears 😂 falling... more

Sound good to you? Share this page on social media and let your friends know about Lit AF Tour hosted by Martin Lawrence at American Airlines Arena.